On April 13, 2021, to alleviate the increasing pressure of nuclear contaminated water storage, the Japanese government passed a bill to discharge treated contaminated water from the Fukushima nuclear accident into the Pacific Ocean. This decision has aroused concerns about human health and the ecological environment in neighboring countries and even around the world. Although the Japanese government has indicated that there are basically no radionuclides except tritium in the treated sewage, and the concentration of tritium will be reduced to 1/40 of the relevant standard, it remains to be confirmed how the nuclear wastewater will spread after discharge and what impact it will have on neighboring countries and even the whole Pacific Ocean. In addition, Japan's nuclear wastewater discharge program will last for 30-40 years, and it has not been confirmed whether there will be an accumulation of radioactive materials during this period.

To address these questions, Jian-Min Zhang and Zhen-Zhong Hu’s team from the SIGS Institute for Ocean Engineering created a diffusion model of radioactive materials on the ocean scale from macroscopic and microscopic perspectives respectively to simulate the long-term effects of the Fukushima nuclear wastewater discharge program. 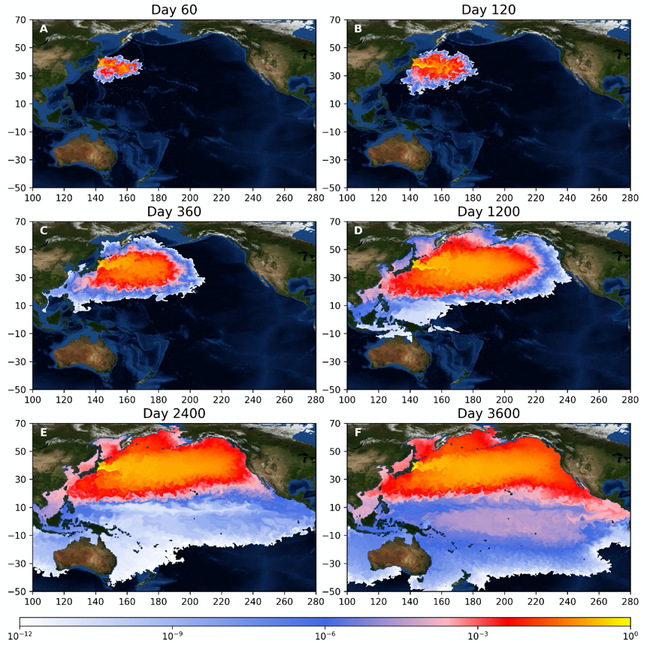 The macroscopic simulation results show that the nuclear pollutants will reach the coastal waters of China 240 days after discharge, and will reach the coast of North America and cover almost the whole North Pacific Ocean in 1200 days. Subsequently, the pollutants will spread rapidly along the American coast to the South Pacific Ocean under the action of equatorial ocean currents, and into the Indian Ocean through the waters of northern Australia. Notably, although the contaminated water is discharged near the Japanese island, the contamination center will move eastward over time along the 35° N latitude line, spreading from the waters near East Asia to the waters near North America. On the 2400th day, the waters off the southeast coast of China will have a lower concentration of tritium (indicated above in light pink), while the waters off the west side of North America will have a higher concentration (indicated in red). 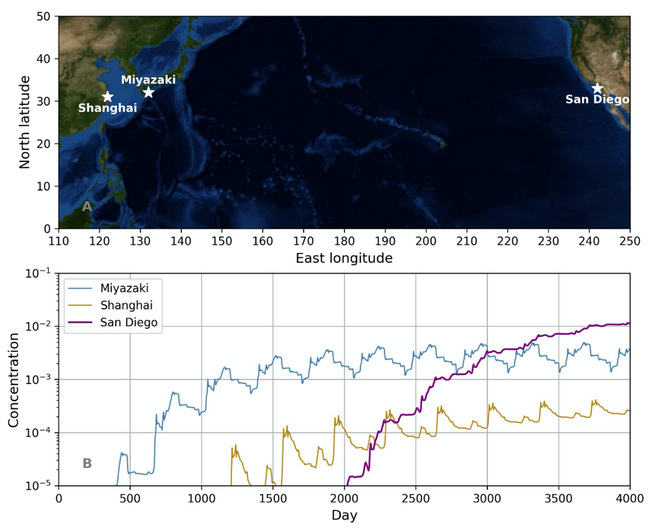 The researchers further compared three coastal cities: Miyazaki, Japan; Shanghai, China; and San Diego, United States. The pollutant concentration graph shows that on the 4000th day, the concentration of pollutants in the waters near San Diego is approximately 0.01, which exceeds three times that of Miyazaki and 40 times that of Shanghai. The main cause for this phenomenon is the strong ocean current near Japan. Specifically, Fukushima is located at the confluence of Kuroshio (northward) and Oyashio (southward) currents. Therefore, most of the pollutants will not migrate north and south along the land edges, but will spread eastward with the North Pacific West Wind Drift. This result also indicates that in the early stage of nuclear wastewater discharge, the focus should be the impact of nuclear pollutants on the coastal waters of Asia. However, at subsequent stages, as the concentration of pollutants in the coastal waters adjacent to North America continues to be higher than that in most East Asian coasts, it is necessary to focus on the pollutants’ impact on the coastal waters of North America. 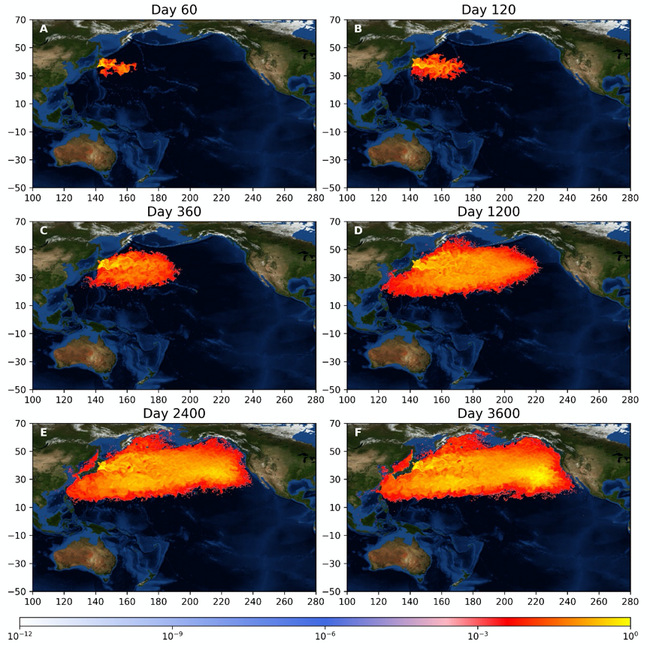 In addition to a macroscopic diffusion simulation, the researchers also carried out a microscopic diffusion simulation of tritium. Unlike the macro diffusion analysis, which focuses on the overall distribution of pollutants, the micro-diffusion analysis pays more attention to the behavior of individual pollutants, so it can support the analysis of the pollutants’ diffusion path. For example, by sampling three pollutant particles arriving at the coastal waters over a 400-day interval in the simulation results, we can predict their motion trajectories. These trajectories reveal that most pollutants in the waters off the coast of the Americas arrive there by crossing the Pacific Ocean.

These results were recently published in the journal National Science Review under the title “Discharge of treated Fukushima nuclear accident contaminated water: macroscopic and microscopic simulations."  The first and second authors of this paper are Yi Liu and Xue-Qing Guo from the SIGS Institute for Ocean Engineering. Associate Professor Zhen-Zhong Hu and Academician Jian-Min Zhang are co-corresponding authors of this paper. The authors of this paper also include Assistant Professor Sun-Wei Li. The research is supported by Shenzhen Planning and Land Resource Committee and Shenzhen Key Laboratory for Marine IntelliSense and Computation. The team's study was also recently featured in an article on EurekAlert!, an online science news service sponsored by the American Association for the Advancement of Science.