Optical tweezers are scientific instruments that use a highly focused laser beam to hold and move microscopic and sub-microscopic objects like atoms, nanoparticles, and droplets, in a manner similar to tweezers. These instruments have potential promising applications in biosensors, nano-sorters, and nano-robots, etc.

Recently, a research team led by Qinghua SONG’s group from Tsinghua SIGS, Yuzhi SHI’s group from Tongji University, and Patrice GENEVET’s group from CNRS-CRHEA, France, has explored the topological features of optical forces within the vicinity of BIC, around which the forces vectors wind in the momentum space. The topological force carries force topological charge and can be used for trapping and repelling nanoparticles. By tailoring the asymmetry of the photonic crystal slab, the topological force will contain spinning behavior and shifted force zeros, which can lead to three-dimensional asymmetric trapping. Several off-Γ BICs generate multiple force zeros with various force distribution patterns. The findings introduce the concepts of topology to optical force around BICs and create opportunities to realize optical force vortices and enhanced reversible forces for manipulating nanoparticles and fluid flow. 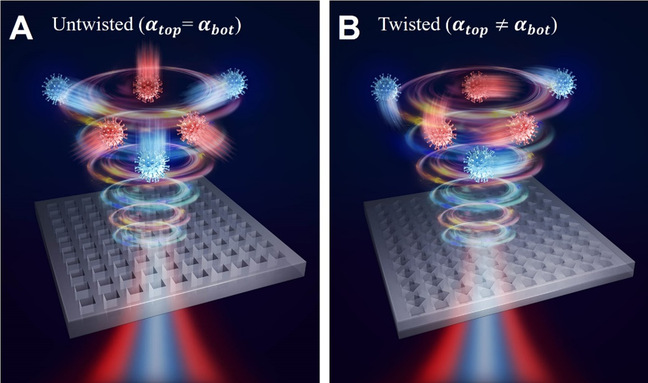 Figure 1 shows the distributions of force vectors in momentum space. With the twisted PhCS, nanoparticles will be trapped to or repelled from the center in a spinning feature like a swirl, which is different from the untwisted case leading to a rectilinear motion. 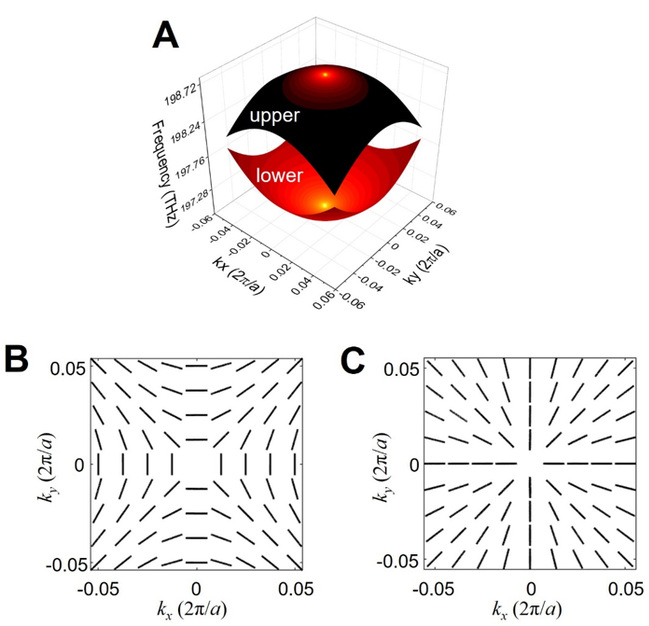 Fig. 2 (A) Iso-frequency surface and color-mapped quality factor of the untwisted PhCS for two eigenmodes (αtop = αbot = 0°). Corresponding distribution of far-field polarization states of (B) the upper band (top) and (C) the lower band (bottom) in (A).

Figure 2(A) plots the calculated iso-frequency surfaces of two bands with their quality factors color-mapped for the untwisted PhCS. BIC with infinite quality factor is obtained at Γ point on each band. Note that the lower-band BIC quality factor decreases more slowly, improving the robustness against perturbation in the value of the momentum. The corresponding far-field polarization states are illustrated in Fig. 2(B and C) with topological distribution, respectively, indicating that the upper- and lower-band BICs have opposite topological charges. 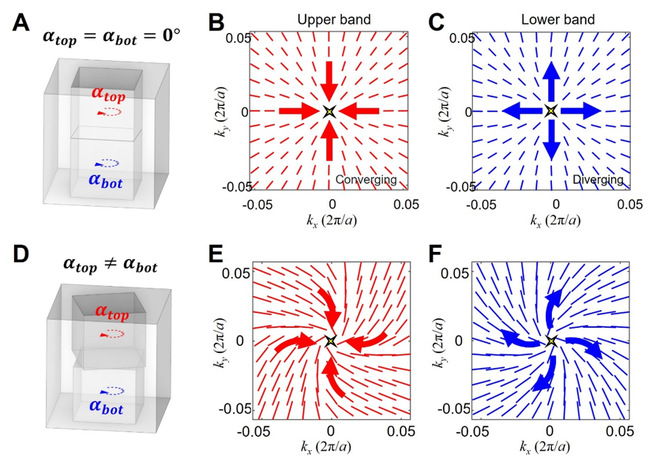 To further demonstrate the effect of converging force, Figs. 3(B and C) and (E and F) plot the distribution of optical force and force zero with untwisted (Fig. 3(A) and twisted (Fig. 3(D)) PhCS when the nanosphere is laterally displaced by about 100 nm in the x-axis direction. The force zero has a displacement toward positive or negative kx, and the topology reveals that the optical force converges or diverges toward the shifted off-Γ force zero. When the nanosphere is moving toward Γ point, force zero will approach Γ point on the other side, and the position of the nanosphere and force zero will finally coalesce at Γ point, achieving optical trapping condition. 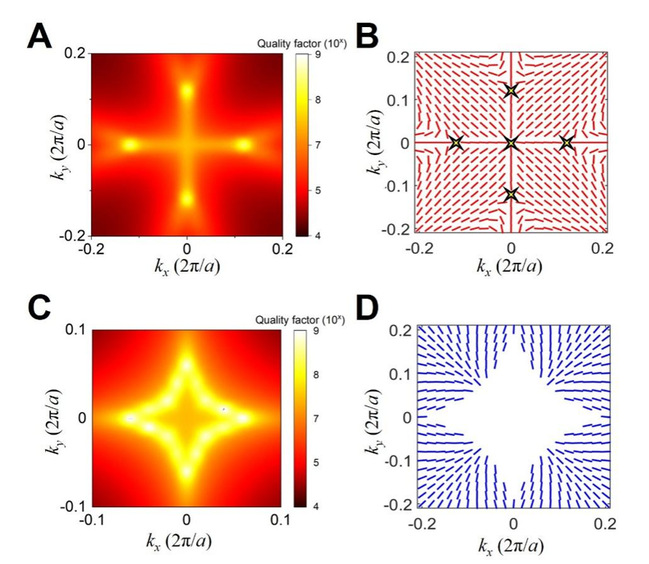 Fig. 4 Topological features of optical force around off-Γ BIC when the untwisted PhCS lattice constant is reduced to 517 nm.

Modifying the lattice constant of untwisted PhCS to 517 nm, the researchers achieved interesting off-ΓBICs from which they evaluated their topological forces in Fig. 4. The team observed that the quality factor presents now four infinite points resulting from four BICs emerging symmetrically at kx = 0 and ky = 0. The corresponding force distribution is shown in Fig. 4(B). Five force zeros are found, and four of them are directly attributed to the BIC modes observed in Fig. 4(A). Another eigenmode has several BICs forming a band that encloses the Γ point (Fig. 4(C)). In Fig. 4(D), the force distribution is radiating outward and goes to zero within a diamond-like region around the Γ point.

This study may open up a new avenue for optical trapping and manipulation of nanoparticles using BIC topology and may also inspire the future development of nanosorters and nanorobots in microfluidic systems.